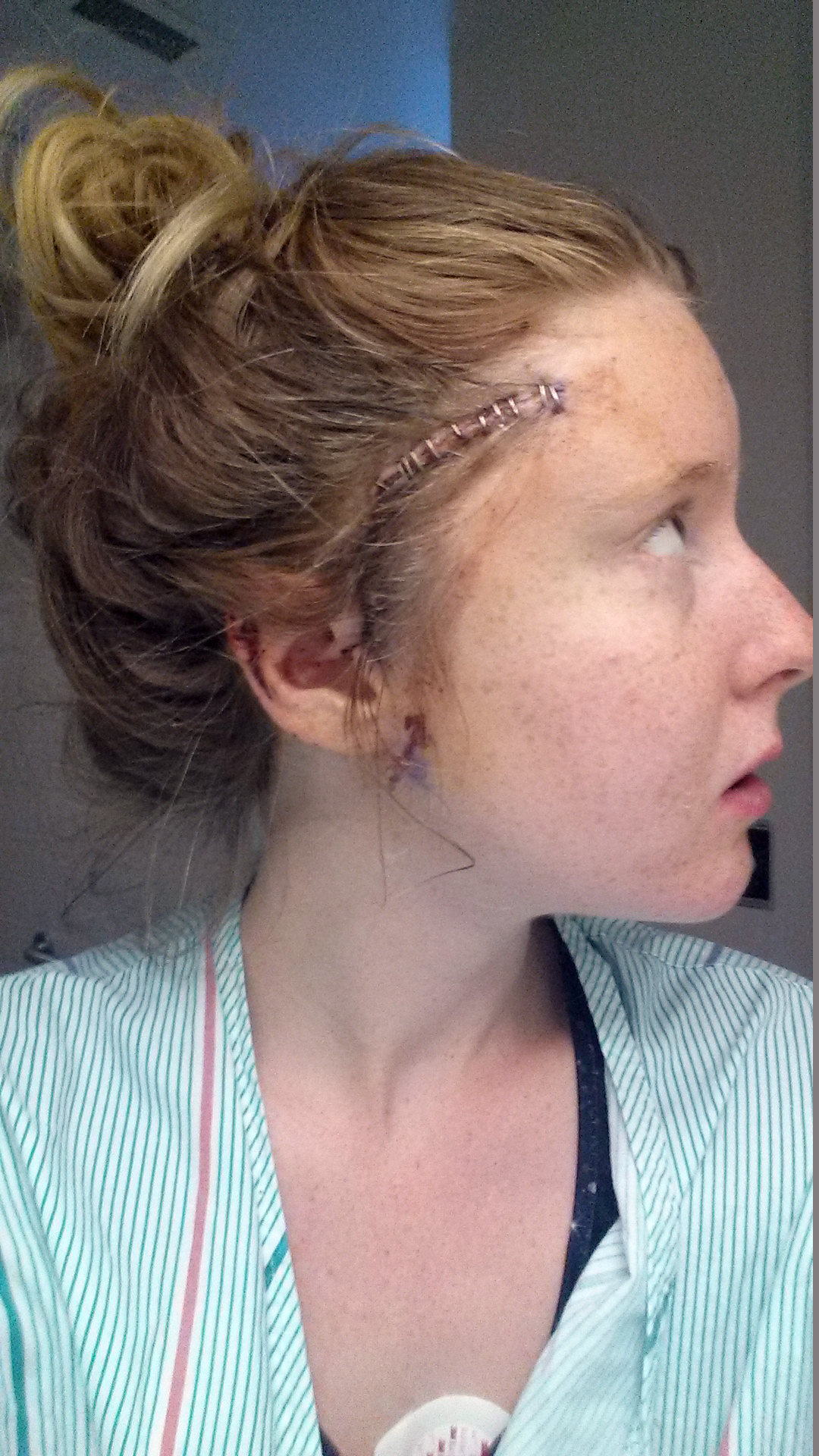 My Experience With a Non Cancerous Brain Tumor 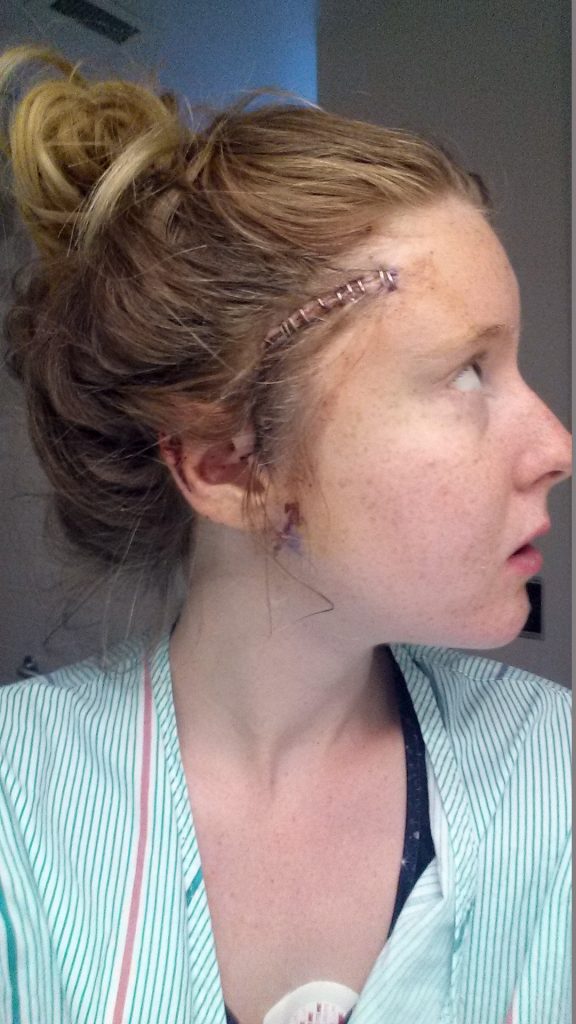 It almost seems unreal when I look back at the whole experience now. It all happened so quickly too.

It all started in the summer of 2015. I was trying to get in shape, as I do every summer, and was taking up running. Now, me taking up running is downright laughable. I was not going more than a mile at a time and I hated it. But back to the story, I was running and I noticed that when I ran, I would see floaters in my right eye.  I ignored this for a month and chalked it up to “optical migraines” I had had those before, and though the floaters were completely different than any migraine I had seen before, I just assumed.  I had also been know to be a bit of a hypochondriac in the past and I didn’t want to make a mountain out of a molehill.

Then the burning sensation started around my eye socket. I had another doctor’s appointment already scheduled with my PC for an unrelated matter, so I casually brought it up at the appointment. My doctor asked me how long I had been experiencing the symptoms. I told her a month or so and she almost panicked. She thought my retina was detaching and told me to see an ophthalmologist ASAP.

I scrambled to find the one person in the area that took my insurance and went in on an emergency appointment. She was incredibly sweet and diligently looked in my eye for detaching of the retina. She could not find any detaching and was worried that it might be a neural issue. She helped me find a neuro-ophthalmologist. It was literally days apart between my appointments.  My whole team did wonderfully. I was soon at Swedish in downtown Seattle meeting with my neuro-ophthalmologist.  He did some tests and discovered I was losing peripheral vision in my right eye.  He thought it was optical neuritis but sent me to get a brain MRI just in case. 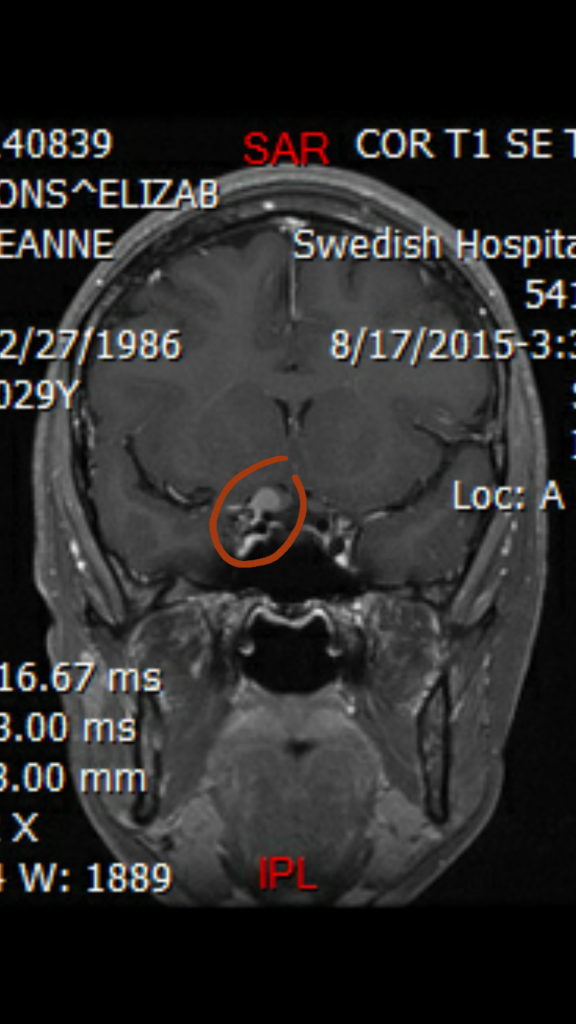 Th next day I had the results of my MRI and my dad came with me to the doctor.  The doctor, my dad and I all looked at the MRI together for the first time. When the doc said “Hmm, that is not supposed to be there.” I immediately knew something was wrong.  He began to describe to me that there was a mass resting between my optic nerve and my brain that was causing my vision changes. He told me we wouldn’t know if it was cancerous until it was out but that he didn’t expect it to be. He sent me to another building in the Swedish center and had me talk to a doctor at the Ben and Catherine Ivy Center as they specialized in brain tumors.  The doctor looked over my MRI and let me know it needed to come out. He described how a crianiotomy worked. How he would cut open the skull and lift the brain before removing my tumor. He let me know he should be able to get it all but he may not because it was growing into my optic nerve “tube” and that was a very sensitive spot. He made it sound like it would be a piece of cake, but it sounded terrifying to me. 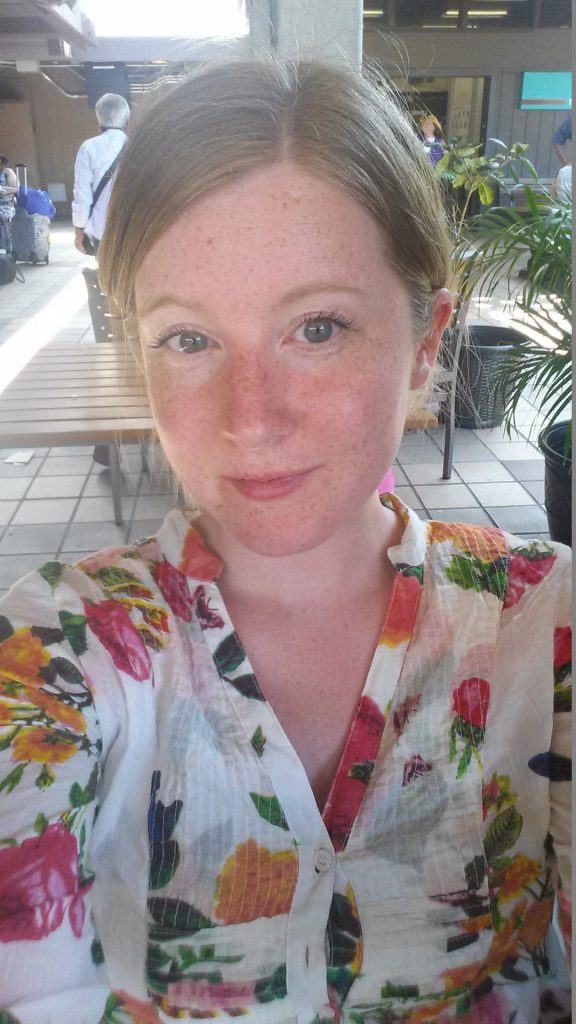 My last day in Hawaii

I left the center and spend the next 12 days on the Big Island of Hawaii hopped up on steroids.  I got heartburn every day and was exhausted.  My trip was supposed to be 2 weeks long, but my paternal grandma passed away while we were there. We rushed home to be with family and prepare for my surgery days later.

My maternal grandmother had found out she had a brain tumor around the same time I found mine.  Hers was the size of a tennis ball though, and it was stage 4 cancer.  She had it removed immediately. She was recovering when her intestines burst, and she had to have a second emergency surgery the same day I had my tumor removed. My mom was torn being away from her mom and being with me. 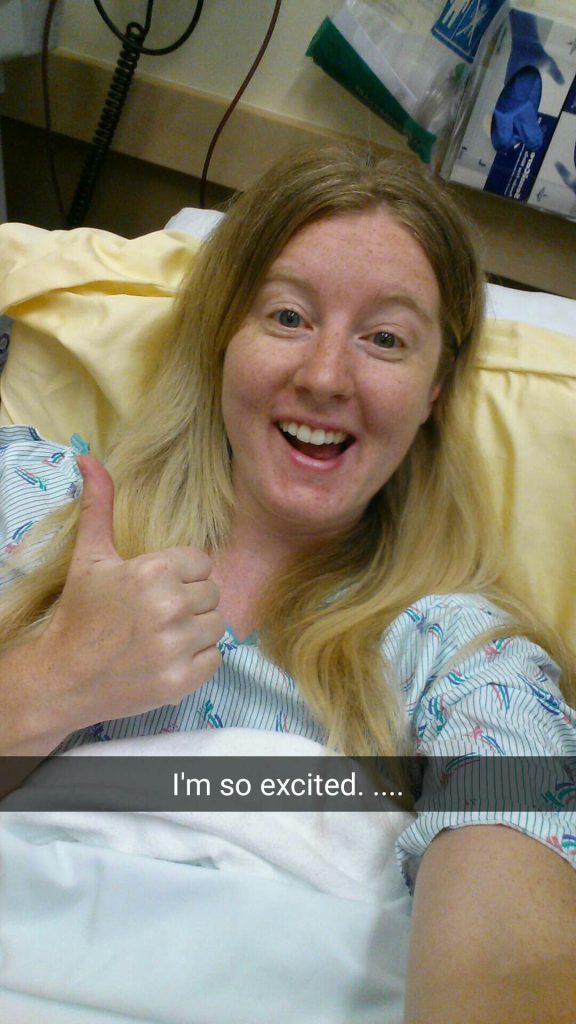 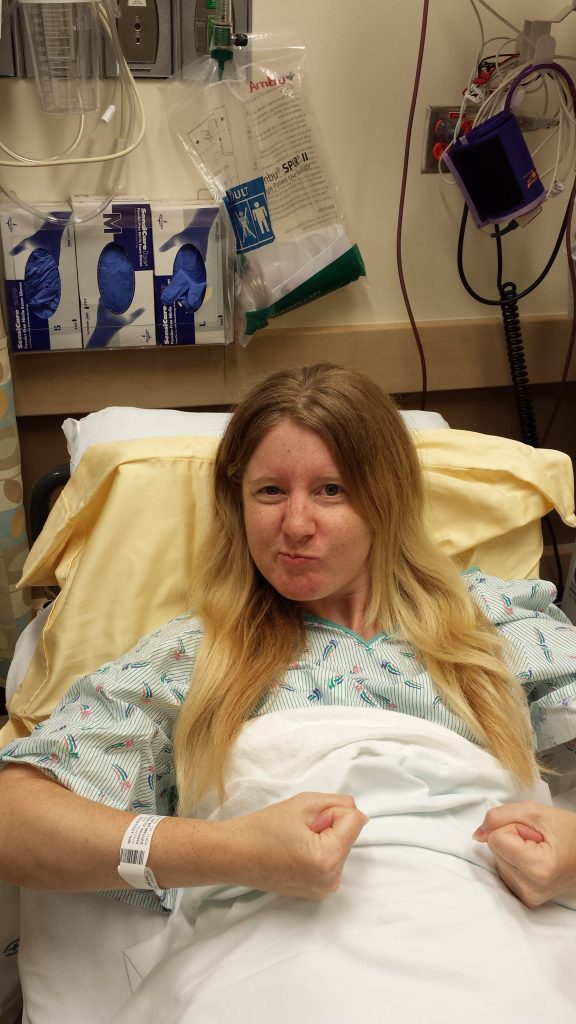 I had to prep for my surgery by showering with the most god awful purple antibacterial soap. I even had to wash my hair with it. I got up bright and early to get to the hospital at 7am for my surgery but didn’t actually go in until much later in the morning. They sent me to a prep waiting room and I talked with a woman also going in for a brain related surgery. She has severe spasms and needed some sort of node installed on her brain. Her entire head was shaved and I immediately began to focus on the positive aspect that I got to keep all but a sliver of my hair. 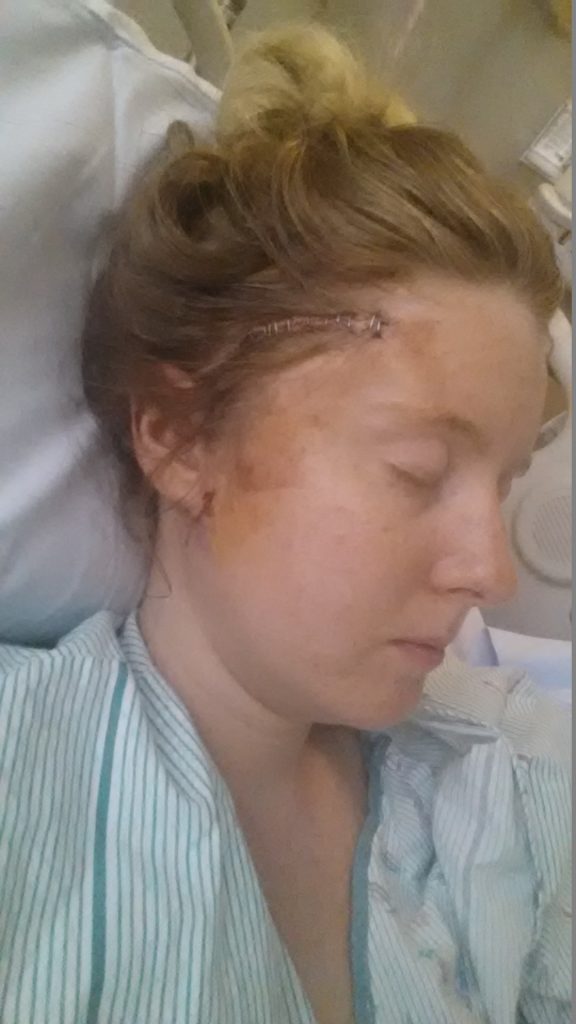 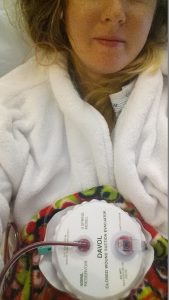 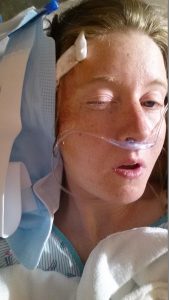 One of the selfies I don’t remember taking. 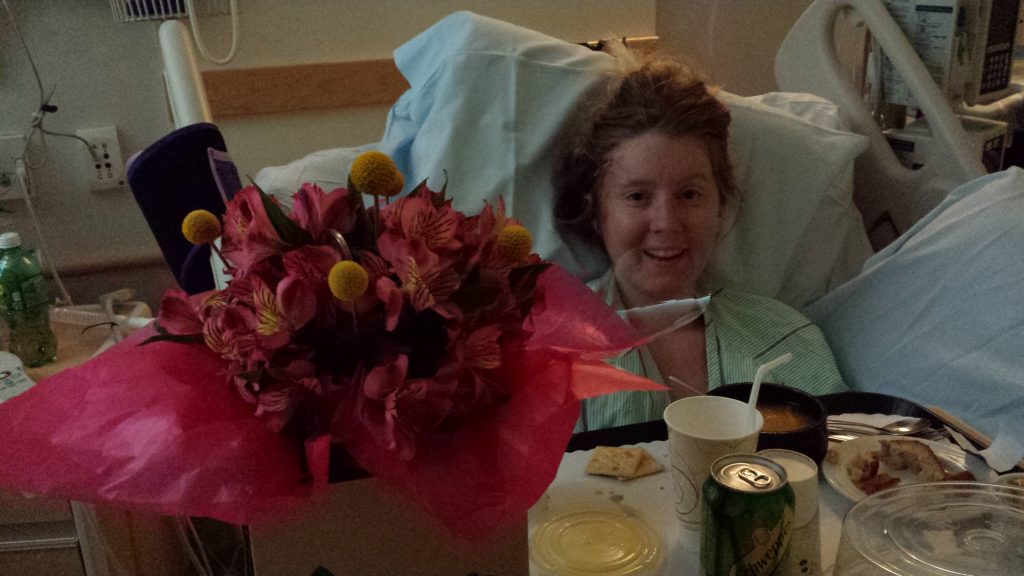 My time came and they wheeled me into the surgery room. My anesthesiologist had me out within 30 seconds. The next thing I remember is being lifted out of the bed like a whale is lifted out of the water. I remember asking what time it was, and for more medicine.  I don’t remember much from the few hours after that. I guess I took some selfies and sent them to my boyfriend.  The next thing I distinctly remember is being with my family in my room.  I felt the staples in my head and the tube coming out of my skull that was there to catch the spinal fluid. 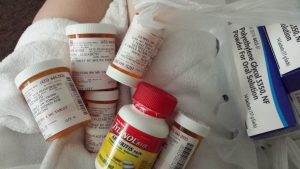 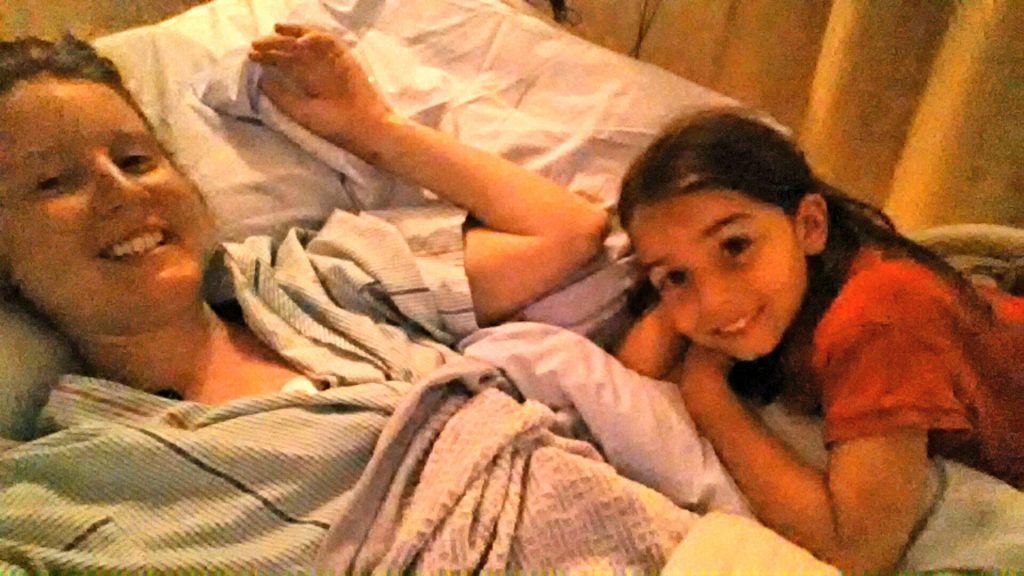 I ate some hospital food fine the first day but the second day I couldn’t keep anything down. The anesthesia wore off and I was puking my guts out.  Other than the puking, my 4 days at the hospital were a complete blur. I remember going home in so much pain.  My face swelled up and turned all shades of purple and yellow.  I could not open my eye or my mouth all the way . My chewing muscle was cut and that hurt like hell while it was healing.  They had me on tons of pills to reduce pain and prevent stroke. I was completely out of it and I looked like Quasimodo. 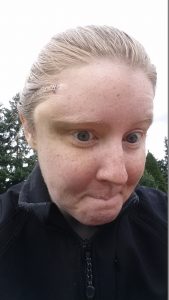 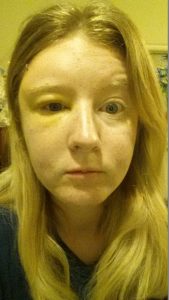 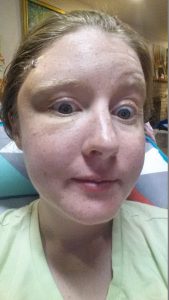 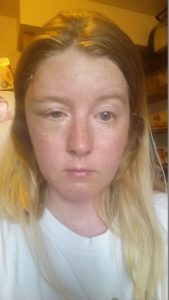 2 weeks after my surgery, things started to look worse for my maternal grandmother. I hopped on a plane with my family and flew to Vermont to say goodbye to her. She did not seem like the same woman at all but I could tell she still loved us very much. It would be another 2 weeks until she passed, but I became very reflective for a period of time after all of this. I will always remember some of her last words to me. She said she didn’t want me to feel alone so she “got a brain tumor too”. I could very easily have had cancer as well. To this day, I am constantly reflecting on the status of life. I have refocused on myself and making good decisions for myself and my daughter. I am happier than I ever was before. I love the people I am around. I am making the most of the time I have. Life is good, and I intend to keep my focus on that each day. 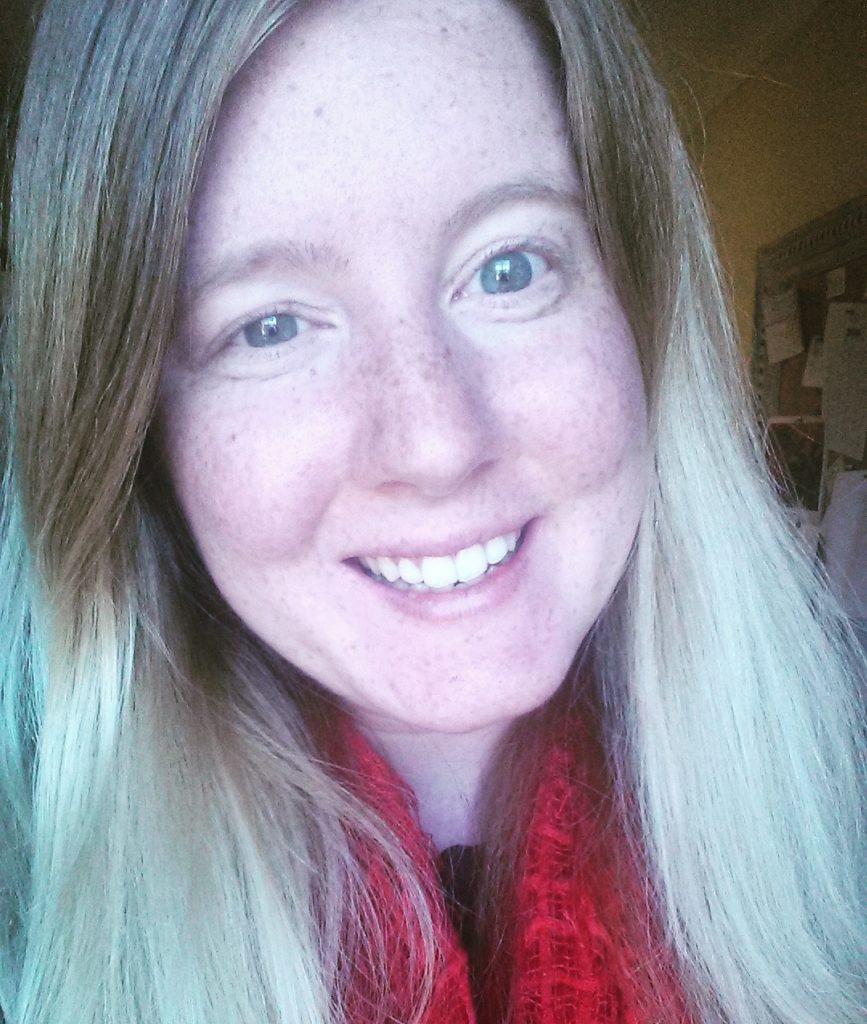