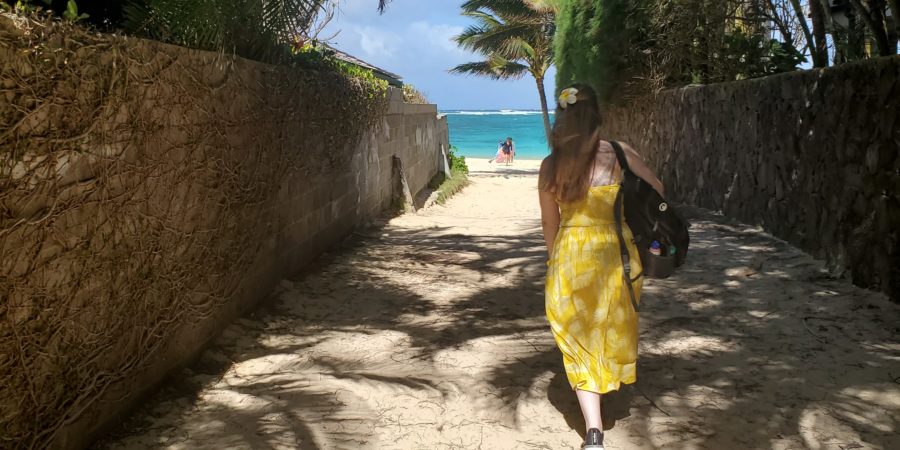 I never thought I would be a solo vacationer, but I have learned to love it. The freedom to do what you want is unparalleled. Though it can be lonely if you allow yourself to think that way, it can be better than travelling with others in many ways.

My trip to Oahu in Feb 2020 was a last minute plan. I had previous plans that fell apart and my birthday was coming up on the 27th. I decided to just treat myself. I bought last minute tickets, booked a hotel and shuttle to the hotel and was on my way.

I landed in Oahu at night. Stepping out into the airport was so different than my past experiences with Hawaii, which were two times on the big island and once at Kauai. If you like nightlife, Oahu is THE place. Bars are open all night and there is always something to do. My shuttle took me to Park Shore Hotel in Waikiki, at the very edge of the strip, right next to the zoo. The perfect location.

I got a good nights sleep and woke before sunrise on my first morning. I walked out on to the beach to enjoy the pink hues. It was then that I realized the extent of the homeless situation in Waikiki. It was a clashing of 2 worlds. The middle class and wealthy vacationers hanging out with those living on the beaches for free. If you don’t mind the sand, you can live in the most expensive part of the US without paying a dime.

I got my favorite meal at a water view restaurant, eggs benedict and looked forward to my upcoming stay in paradise. I spent the rest of the day walking to shops, eating, and sitting on the beach.

The next day, I was up early again. Had the SAME meal at the same restaurant then headed out for a 5 mile walk to Magic Lagoon Island where I would be taking my first SCUBA lesson. The water was a bit cold because it was Feb, but I suited up and went in with the instructor and the others in the lesson. There was a couple (also from Seattle!) that had never even swam before….so I am not sure why they thought this was a good idea. They took up a lot of the instructors time and ended up leaving. We only had 20 minutes left for our lesson. At first, the mouthpiece was hard to not gag on; I have a notoriously small mouth, but I got the hang of it. Blowing out my ears was not something I had expected and probably the hardest learning curve. Once I got it, I had so much fun looking at the coral and fish. The set up made me feel like I was in another world. I was proud of myself that day!

After the Scuba, I laid around to dry off a little, then walked another 2 miles to a mall and Target to get food. I started my walk back to the hotel, but was pretty worn out from SCUBA and 7 miles so I hailed an UBER. That night, I went out to a bar called Cheeseburger in Paradise and had an amazing Mai Thai. I went to bed early.

I was up early again the next day for my next adventure. The Bus!! I didn’t want to uber to the other side of the island so I paid for a bus ticket and enjoyed the 3 hours it took the bus to get the the beach I wanted. I got off at the beach and it was not as spectacular as I had hoped so I ordered an uber for a botanical garden 2 miles away.

My uber showed up and the driver, a young guy my age, asked why on earth I was traveling 2 miles in the middle of nowhere by myself. I told him I took the bus there from Waikiki. He laughed and offered to tour me around the island for $50. I thought about it, shared my location and his info with friends, and took him up on the offer. It turned out to be a really good idea because he drove me all over. It was really fun. I saw several beaches, mountain views, feral cats and more.

After he drove me back, I went out to a very fancy restaurant, House Without a Key, on Waikiki Beach. I had some HORRIBLE fish tacos, a mediocre mai thai and a fantastic chocolate cake with gold flecks on it. Real Gold. I ended up meeting up with the uber driver again later and he took me to a gay karaoke bar in town. I had a blast there, but later that night, the fish tacos made a reappearance when I realized I had gotten food poisoning.

My entire next day was shot. I laid in bed all day wishing I had not had the fish tacos. The next day I went for a long walk among the lush parks and then ubered out to the beach Obama owns a house on, Lanikai beach. Now that was a beautiful beach!! I stopped at the Polynesian Center, but opted out and went to a free hula show on waikiki beach that night. As a VERY amateur hula dancer, that was amazing to see.

The next day, I just chilled on the beach until I was scheduled to go home. My week in paradise was over. As I shuttled to the airport, I heard about Hawaii’s very first COVID case, at a beach 2 miles where I was staying. Little did I know how lucky I was to have been able to take one last vacation to Hawaii before the pandemic. Only 2 weeks later, everything shut down.